Sam is constantly tired, out of breath and listless. When he's lying down, he starts coughing, sometimes to the point of gagging.

He barely eats, yet he seems to be putting on weight nonetheless. That's because of all the fluid he retains.

Unfortunately, Sam will never get better. Sam suffers from cardiomyopathy. A heart muscle disease. A hereditary, chronic disease from which Sam will probably die in the foreseeable future.

And Sam is only 3 years old.

Cardiomyopathy is one of the most common diseases in cats. As many as one in 7 cats is diagnosed with this form of cardiomyopathy. In some purebred cats, the frequency of occurrence is even 1 in 4!

Of course, we also know cardiomyopathy as a disease in humans, with very similar if not identical symptoms. In the Netherlands, about 40,000 people suffer from cardiomyopathy, of which more than 7,000 die each year.

It is therefore an extremely severe disease, which still has a fatal outcome far too often, in humans and animals.

We now know that cardiomyopathy is mostly genetically determined and that certain external factors, such as the environment, lifestyle, and habits can influence the onset and progression of the disease. However, we do not yet know enough about how these interactions between genetic and external factors work. It is suspected that the blood vessels play an important role. After all, these are the 'gatekeepers' of the body, which determine which substances are or are not passed on.

Unfortunately, existing research on the relationship between genetic and external factors and the role of blood vessels in cardiomyopathy patients often still uses laboratory animals such as mice, rats, or zebrafish. In addition to ethical issues regarding the use of laboratory animals, this type of animal is physiologically different from humans and pets such as dogs and cats. In addition, the genetic abnormalities to be investigated are first artificially induced in the laboratory animal, making the research results difficult to apply to the patient.

To still be able to help human and animal patients with cardiomyopathy, without using laboratory animals, the research group led by Dr. Frank van Steenbeek wants to develop a model based on stem cells (obtained from blood or urine) of cardiomyopathy patients.

With this tailor-made model, the role of blood vessels in cardiomyopathy can be studied. He wants to make stem cells from blood cells or urine of patients (human or veterinary) with diagnosed cardiomyopathy that can be programmed to the 3 most important cells in the heart: muscle, connective tissue, and blood vessel. With the combination of these cell types, the cardiac muscle tissue can be simulated by perfusing this tissue with a medium containing healthy nutrients. By then looking at the newly formed tissue, it is possible to measure how a heart responds to external factors, for example, a high-fat diet, how diabetes stimulates the early development of heart disease, or what effect drugs have on heart muscles. In addition, early markers that can function as biomarkers can be searched for in the perfused medium.

With this project, we want to gain new insights into mechanisms of genetic heart disease and obtain an alternative to animal use in which physiologically comparable interactions between the environment and the complexity of the heart tissue can be measured.

For human and animal patients, if they have a DNA mutation, it is not clear what can ultimately aggravate the disease. When it is known which factors are harmful, tailor-made advice can be given regarding lifestyle. In addition, an early biomarker can support the earlier recognition of the disease.

But to realize this project, we need your support. 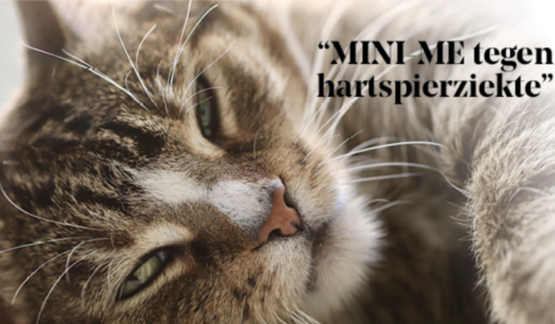 You can embed a Donate button on your existing website to receive donations. Visitors who click the button will be sent to your Kentaa website to complete a donation.

Simply copy and paste the html code to your website and place it in the <head> section of the website. Or ask your web developer to do this for you.